It is always good to ensure you are getting a lot of different colors of foods in your diet. I find the easiest way to do this is to have a smoothie. I use a NutriBullet for my smoothies. It is a lifesaver for a quick meal. I also use it for my soups, pestos, etc. In Lent, such ease also helps one gain a little bit more time – for prayer, for studies, …

The reason this is on my mind is because I FINALLY found heirloom carrots in the city of Rome. When I was in the States I would weekly buy a bag of “Carrots of Many Colors” at Trader Joe’s. The bag I found in Rome is a small (1 1/2 cups) of baby carrots (yellow, orange and purple). Now, I will be even more determined to find a market that sells “fresh” carrots.

Also, this has been a productive week. I also found RIPE avocados!!! This just isn’t possible normally in Rome….and there is no chance of ripening the avocados you can buy at the supermarkets. (I HAVE NO IDEA WHAT THE ITALIANS DO WITH AVOCADOS, but in the state they come in at the supermarket they are basically inedible….and pricey!).

In the end, I made a smoothie with 5 different colors. I feel accomplished.

Smoothie of Many Colors

For the nutribullet, one is to put the vegetables in first, then fruit. And then cover to the line marked with liquid. It was a very smoooooth smoothie! Thanks to that ripe avocado. 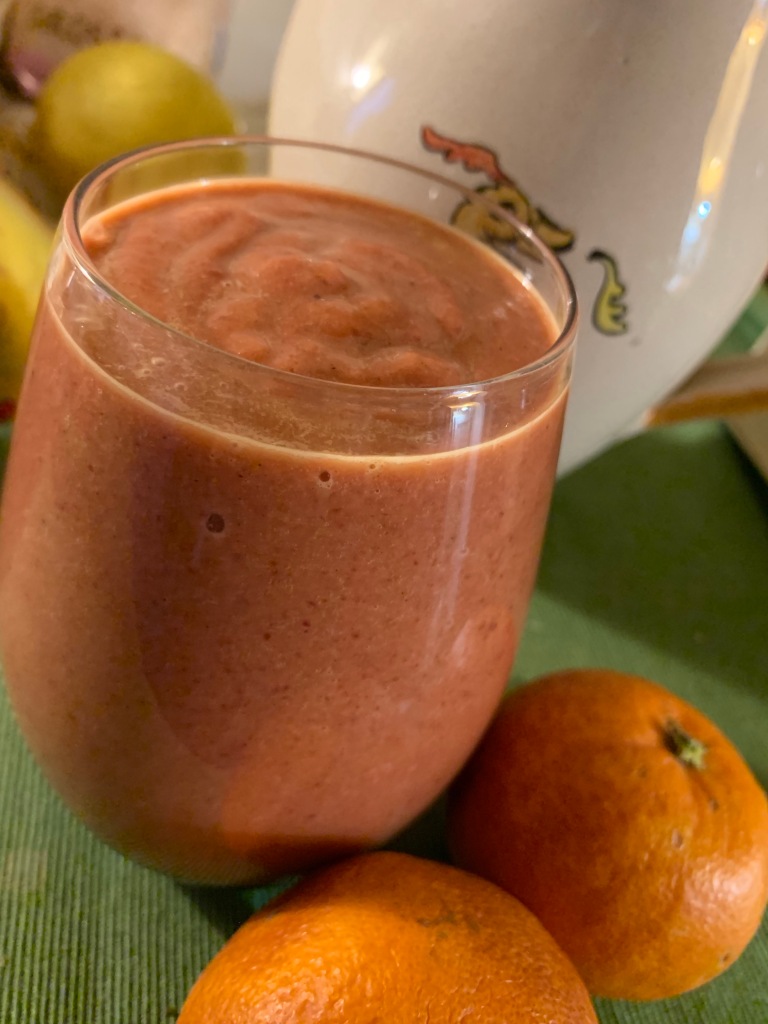 And, now you want that recipe for Apple Cider Kombucha (for 1 Liter batch): 3/4 cup of cold pressed Apple Juice (type of apple juice is at your discretion, naturally, just try to get the best kind you can), 1 tsp of turmeric, 1 tsp of cinnamon, 1 tsp of powdered ginger. Basically, you need to get these flavors in there. You can do it in a variety of ways. You can make ginger tea (peeled and sliced fresh ginger steeped in boiling water). I just put the other spices in the kombucha. So long as you give it time, it works. I occasionally overturn the bottle just to get the spices dispersed. Let it sit for 24-48 hours at room temperature before using, to permit for that second fermentation of the sugars in the apple juice.

[You could make cinnamon tea with steeping a cinnamon stick – apparently you can have too much cinnamon, and there are side effects to the variety of Cassia Cinnamon, which is probably what is typically in supermarkets. I’ll look into this. If you have short, succinct information on this and can comment (without links), please do.]